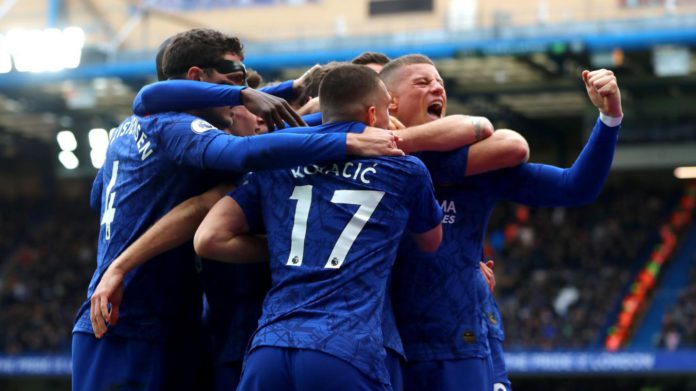 Olivier Giroud scored his first Premier League goal of the season – and his first since April – as Chelsea beat Tottenham 2-1 to tighten their grip on fourth place.

Marcos Alonso added a second for the Blues, who were made to sweat the final few minutes when Antonio Rudiger turned into his own net.

Giroud’s first Premier League goal since April arrived in the 16th minute when he drove his half-volley into the bottom corner after Ross Barkley’s shot ricocheted off the post.

Tottenham were disappointing in the first half and their best chance arrived in the 34th minute, but Lucas Moura’s near-post shot was crucially blocked by Cesar Azpilicueta before, from the resultant corner, Willy Caballero tipped Davinson Sanchez’s looping header over the bar.

Marcos Alonso quickly extended Chelsea’s lead at the restart with a low piledriver into the bottom right corner from the edge of the box.

There was a moment of real controversy moments later as Giovani Lo Celso appeared to stamp on Azpilicueta, but it went unpunished with VAR deeming there to be no foul.

Tammy Abraham’s point-blank tap-in was brilliantly saved by Hugo Lloris in the 78th minute before Alonso’s free-kick crashed off the bar moments later.

But the game took a tense turn in the final moments as a low ball from Erik Lamela looking for Dele Alli was deflected in by Rudiger.

But Chelsea held on to maintain their top-four berth with a four point gap over fifth-placed Tottenham.

The VAR officials at Stockley Park admitted they should have sent Lo Celso off for his clear stamp on Azpilicueta earlier on and said it was not a VAR error but a human error.

For referee Michael Oliver to have not seen it was one thing, but for VAR to then say at the time that a potential season-ending challenge was not worthy of punishment was even more remarkable.