Deputy General Secretary of the National Democratic Congress (NDC), Peter Otokunor has broken his silence on a kaftan and a pair of sneakers he wore in a recent photo that has become a subject of online troll.

Mr Otukunor has explained that the ‘combination’ was done in a spirit of ‘change’, adding that he is elated the photo has become a social media sensation.

The NDC Deputy General Secretary has been trolled on social media for his bizarre sense of fashion.

Many people have described his dressing as one of the biggest fashion faux pas.

But a proud Otukonor took to his Twitter page to explain the motive for his ‘Otuknor’s Classic’.

Good morning fellow Countrymen, Comrades, Compatriot and fellow Combatants, i see my classic combination of traditional (Kaftan) and urban (sneakers or camboo) fashion has sparked a new political fashion trend on social media. That is a good one. That is the spirit of #Change. pic.twitter.com/4jn5AkHX6P 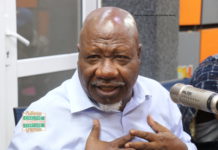 I don’t have a political identity – Allotey Jacobs [ Audio]