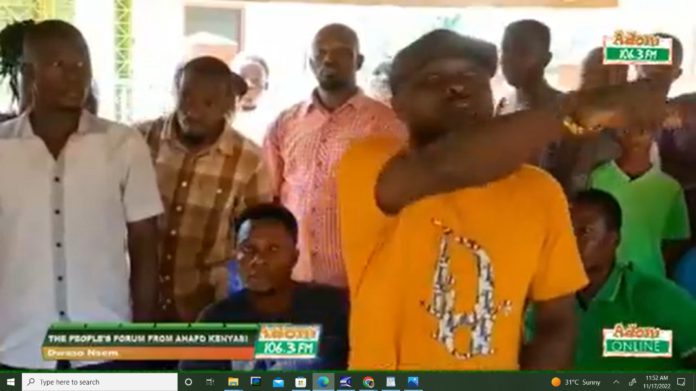 Residents of Kenyasi in the Ahafo Region have threatened a faceoff with Newmont Mines over what they described as incessant killings in the area.

According to the residents, it is a crime for any worker or security officer of the company to kill animals.

However, human beings are shot and killed by the company’s security personnel every now and then.

Aside from the killings, the residents lamented despite years of existence in the community they recruit employees from Tarkwa and other areas while indigenes wallow in poverty.

The aggrieved residents disclosed this when they took their turn on the People’s Forum segment on Adom FM’s morning show, Dwaso Nsem, Thursday.

The residents say the incident is becoming one too many, hence the decision to take the law into their own hands as traditional authorities and other stakeholders are reluctant to act.

“People are killed every now and then for no reason by these police officers they call anti-robbery squad who are not even from the town but the local Police are to be blamed for what we are going through.

“We have served several notices to demonstrate against these ills but for over a year, we have not been given the approval so is it that they don’t want us to gain freedom? Our chiefs are reluctant because they have shares in Newmont but we can’t allow this to continue,” a resident lamented.

Another added, “we have suffered for so long and we cannot let the next generation also go through this so if they should kill again, we will face off with them. We will shed our blood to redeem and protect our land.”

This comes barely 24 hours after police officers reportedly stationed at Newmont Mining Limited clashed with the youth at Kenyasi Number 2 in the Ahafo Region.

The altercation led to the death of one person and four others were left in critical condition.

In a reprisal attack, a group of people attacked the residential facilities of Newmont staff putting the lives of employees and their families at risk, amidst looting and vandalizing of property.