Ghanaian duo Thomas Partey and Tariqe Fosu Mensah have joined the Black Stars training ahead of the game against Ivory Coast.

Partey and Tariq-Fosu missed the game against the Atlas Lions in Rabat on Tuesday at Rabat.

The Arsenal player was allegedly sacked from camp according to reports after turning up late, reports that were later denied by the Ghana Football Association (GfA).

Tariqe Fosu was also left behind for also failing to show up on time, according to a statement issued by the GFA.

Ghana will host the Elephants of La Cote D’Ivoire on Saturday in their second friendly match, having already played against Morocco on Tuesday.

The FA announced that the Arsenal midfielder was earlier in camp to seek permission to miss the trip to Morocco while Tariqe Fosu failed to communicate early, his decision to be late.

However, after their return to Ghana following the loss to Morocco, the pair joined their teammates for Wednesday’s training session and are hopeful of getting minutes at the Cape Coast Stadium on Saturday.

The friendlies form part of Ghana’s preparation for the 2022 World Cup qualifiers scheduled for September.

We deserve every criticism from Ghanaians – Black Stars winger 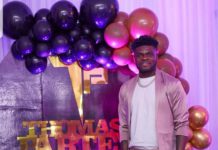