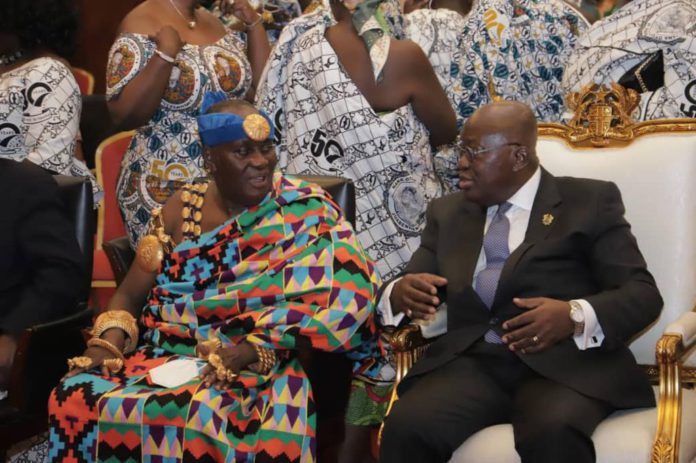 The Omanhene of Juaben Traditional Area, Nana Otuo Siriboe II, has led a delegation to thank President Nana Akufo-Addo at the Jubilee House.

The visit was to appreciate the First Gentleman of the land for attending the 50th anniversary of his enstoolment.

The chief in a brief remark expressed profound gratitude to President Akufo-Addo, especially for gracing the occasion on 4th December, 2021.

He was in attendance with South Africa President, Cyril Ramaphosa who was then on a three-day state visit to Ghana.

Nana Otuo Sereboe was also grateful for development projects his area has so far benefitted under President Akufo-Addo which include road and school projects.

On behalf of his Traditional Council, he presented special gifts of kente cloth to Presdent Akufo-Addo and First Lady Rebecca Akufo-Addo.

President Akufo-Addo on his part said he feels honoured for the gratitude shown him.

According to him, his colleague President Ramaphosa was excited to be present at the grand durbar, especially due to the rich culture that was exhibited adding that his experience at Juaben became his thoughts until he returned to South Africa.

The President prayed for God’s protection for the Juaben chief and the members of the Council of State so that they will continue to give him wise counsel to govern the country.