The Accra High Court hearing the GH¢217 million financial loss case against the former Chief Executive Officer of the Ghana Cocoa Board (COCOBOD), Dr Stephen Opuni, and two others, has adjourned the case to January 31 this year following a latest application filed by Dr Opuni to bar the trial judge from further hearing the case.

The application, invoking the supervisory jurisdiction of the Apex court, is seeking to prohibit Justice Clemence Jackson Honyenuga, a Supreme Court judge sitting with additional responsibilities as a High Court judge, from continuing to hear his case.

In view of that, when the case was called yesterday (January 17), the trial judge said it was apt to adjourn the trial and await the determination of the motion before the Supreme Court.

The former COCOBOD boss is standing trial together with private businessman, Seidu Agongo and his company, Agricult Ghana Limited, for allegedly causing over GH¢217 million financial loss to the state.

The current motion seeks to quash a decision made by the trial court which dismissed his application which sought to recuse the trial judge from presiding over the case on grounds of alleged hostility and likelihood of bias, and prohibit the judge from further hearing the case.

The application has been scheduled for February 8, this year, at the Supreme Court.

This is not the first time Dr Opuni is making a move to bar Justice Honyenuga off the case as he had earlier filed an application before the same trial court to get the judge to recuse himself.

The application was then dismissed by the court which held that it was brought in bad faith.

The hearing of that particular application was made possible after the Chief Justice dismissed a petition which asked for a different judge to hear the application for recusal.

Prior to that, Dr Opuni went to the Supreme Court asking it to exercise its supervisory power to quash the part of the decision of Justice Honyenuga to exclude some exhibits in his ruling on a submission of no case filed by the accused persons.

He also asked the court to prohibit the trial judge from further hearing the case which was granted by a 3:2 majority of the court.

But the decision was later reversed by a 4:3 major review panel which reinstated Justice Honyenuga to continue hearing the case.

Dr Opuni and a businessman, Seidu Agongo, are standing trial over accusations of causing financial loss of more than GH¢271.3 million to the state in a series of fertiliser deals.

Dr Opuni was the CEO of the COCOBOD between November 2013 and January 2017, while Agongo is the CEO of Agricult Ghana Limited, an agrochemicals company.

Opuni files another application to remove Justice Honyenuga from his case 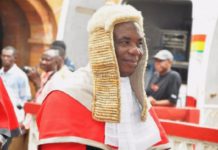