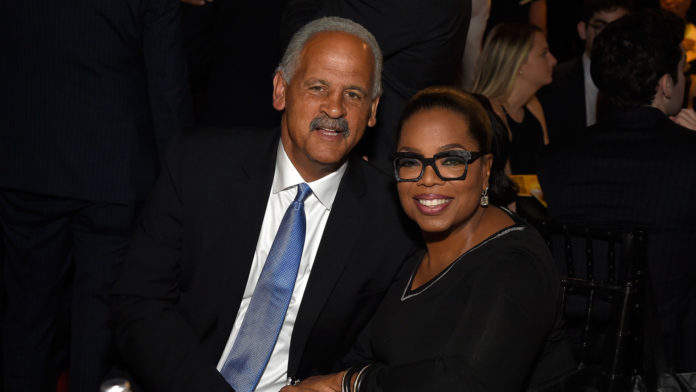 Oprah Winfrey is not messing around when it comes to the coronavirus outbreak.

During an Instagram live session on Monday, the TV mogul revealed that she and her longtime partner, Stedman Graham, are self-isolating separately during the pandemic.

While chatting with the digital director of Oprah Magazine, Arianna Davis, Winfrey explained why she asked Graham to keep his social distance from her at the start of their quarantine.

“He’s at the guest house, because you all know I had pneumonia late last year. … I had just gotten off antibiotics last week, because I had a bronchial infection,” she said, adding that her partner didn’t take the public health threat too seriously initially. “‘I don’t see what everybody’s getting so upset about!’ That’s what Stedman was saying … and that’s why Stedman’s at the guest house!”

The OWN mastermind took full responsibility for the decision, which she made in part because of Graham’s recent travel history. According to Winfrey, Graham returned home late last week after a completing a speaking engagement in St. Louis.

“Stedman did not arrive from Chicago until Thursday … he’d been on planes, so Stedman is like, ‘What’s the procedure for coming home?’ The procedure is … you ain’t coming and sleeping in my bed!” she said. “He goes, ‘I’m not?’ And I go, ‘Have you not been paying attention to the news? Social distancing does not mean you go and sleep in the same bed with the person! When you just got off American Airlines!”

In a second video posted Monday on Oprah Magazine’s Instagram, Winfrey went to check on Graham at the guest house, where “the meals are dropped off at the door” and “it’s not bad” — Graham shouted through the window.

Though the couple said they miss each other, Winfrey contended on Instagram live that he isn’t “upset” about the arrangement.

Winfrey’s conversation with Davis came on the heels of her brand-new Apple TV+ series, ‘Oprah Talks COVID-19,’ which last week welcomed Idris Elba and his wife, model Sabrina Dhowre, as its inaugural guests.

Before appearing on Winfrey’s show, Elba had announced that he tested positive for the virus, and it was later revealed during their interview that Dhowre had contracted COVID-19 as well after choosing to stay with him.

“As soon as I heard that Idris was exposed … I wanted to be with him,” Dhowre explained. “I think that’s an instinct as a wife. You just want to go and take care. … I made the decision to want to be with him and still touch him.”