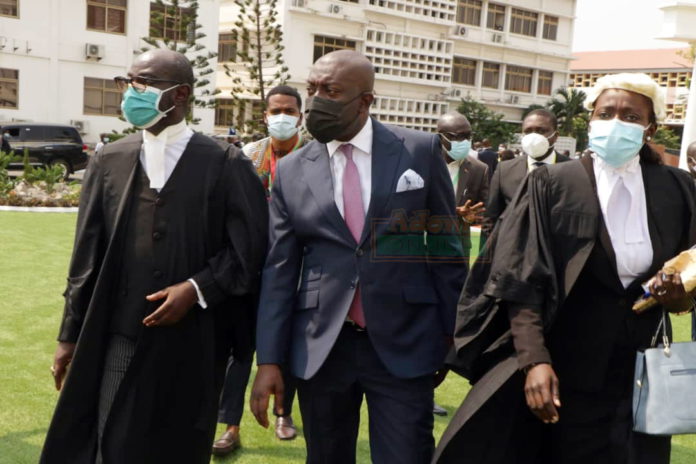 The New Patriotic Party (NPP) has dismissed claims that Kojo Oppong Nkrumah and Henry Nana Boakye are inciting Justices of the Supreme Court against lawyers of the Petitioner in the ongoing Election Petition case.

According to the party, the claims are blatant falsehoods that must be rejected by Ghanaians.

This comes on the back of a statement from the National Democratic Congress (NDC) which accused the duo of turning the Supreme Court Judges against Dr Dominic Ayine and lead counsel and subjecting them to attacks.

According to the NDC, the NPP team had used their media briefing after each court proceeding to launch attacks against the counsel for former President John Mahama and further incite the court against the former Deputy Attorney General, Dr Ayine.

However, the statement, signed by the Director of Communications, Yaw Buaben Asamoa, said: “Dr Ayine has in the past been warned by the court for his conduct aimed at disparaging the Supreme Court.”

The statement added: “It is an affront to the apex court of the land for the NDC to suggest that the venerable, experienced and learned Justices of the Supreme Court who, over time, have demonstrated to be independent and objective are amenable to ‘incitement’ by spokespersons of the 2nd Respondent.”

RE: ATTEMPTS BY KOJO OPPONG-NKRUMAH AND HENRY NANA BOAKYE TO INCITE THE SUPREME COURT AGAINST NDC LAWYERS

The New Patriotic Party (NPP) has taken notice of a press release from the NDC that seeks to create the false impression that the Supreme Court is being “INCITED” to cite Dr Dominic Ayine for Contempt and also the lead Counsel of the Petitioner has been subjected to attacks by Hon. Kojo Oppong- Nkrumah Esq. and Henry Nana Boakye Esq.

The NPP takes strong exception to the plain lies therein and without a shred of equivocation, state:

1. It is an affront to the apex court of the land for the NDC to suggest that the venerable, experienced and learned Justices of the Supreme Court (SC) who, over time, have demonstrated to be independent and objective are amenable to “INCITEMENT” by spokespersons of the 2nd Respondent.

2. The claim that Hon. Kojo Oppong-Nkrumah Esq. and Henry Nana Boakye Esq. seek to incite the SC against Dr Dominic Ayine is a blatant falsehood that must be rejected by Ghanaians.

3. The unfortunate comments from Dr Dominic Ayine that “for the Supreme Court to reduce the Petition into a single issue Petition is rather unfortunate and smacks of a predetermined agenda to rule against the Petitioner in this matter…we think that the court by this decision has not done the people of this country a great service. In the sense that Ghanaians are interested in knowing the truth…the Justices, today, has not given us a reason to believe that they want the people of this country to know the truth about what happened” were voluntarily uttered by Dr Ayine and he is solely responsible for its consequences.

4. Dr Ayine has in the past been warned by the court for his conduct aimed at disparaging the Supreme Court.

5. The suggestion that the Lawyers and Spokespersons of the 2nd Respondent have been attacking, insulting and belittling the lead Counsel of the Petitioner is a plain falsehood, mischievously crafted to solicit public sympathy for the legal team of the Petitioner to conceal their poor performance, evident from the dismissals almost every major motion/application they have filed has suffered thus far.

6. The regrettable attitude of the lead Counsel of the Petitioner towards the bench has been a matter of public outrage and it is not correct to suggest that it is the lawyers or spokespersons of the 2nd Respondent that have made a case out of it.

7. It is utterly shocking for the National Communications Officer of the NDC who, over the years, have persistently insulted and disrespected President Akufo-Addo – someone whose legal and political achievements, the former may never be able to attain in his entire life – to lament and suggest that the spokespersons of the 2nd Respondent ought to show deference to seniors at the Bar when in actual fact, there hasn’t been any act of disrespect on the part of the 2nd Respondent’s team towards the Petitioner’s lawyers or spokespersons.

8. We encourage the NDC team to focus on explaining to their supporters why the statistics they earlier claimed were in their favour have been abandoned in court.

9. We also admonish them to desist from misinforming the public on developments in court and also refrain from their penchant to create a false impression that the court is biased against them.

10. The Spokespersons for the 2nd Respondent’s legal team will remain forthright and continuously inform the public on the truth about developments in court and not hesitate to respond adequately to the NDC propaganda.