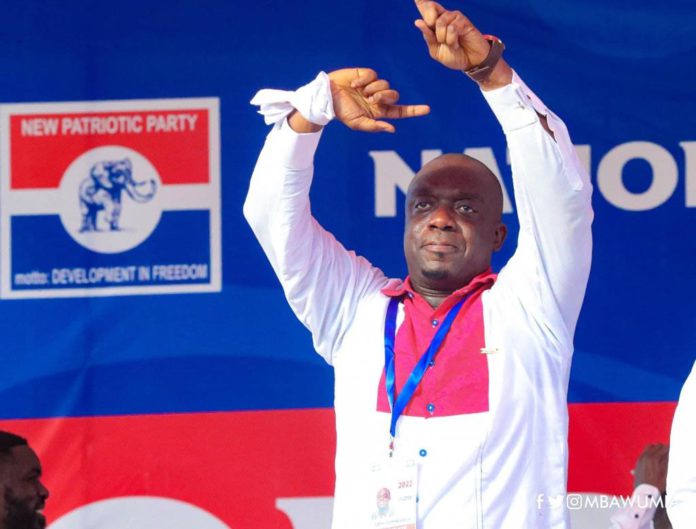 Lawyer Justine Kodua Frimpong’s presence in the political landscape of the country and his influence on managing power and influence in the NPP is one in many that has not been in a long while in Ghana’s burgeoning democracy.

From the very day he emerged in to an office mainly the preserve for people with a certain number of years and understanding to the general secretaryship position of the NPP, many were wondering if he would be able to survive the vagaries of the office, but seemingly , the man has proven and upped his game to a level political opponents cant help but to admire.

The government currently under the leadership of president Nana Akofu Addo is under intense pressure, especially in the management of expectations of Ghanaians, government, party and especially opposition who have never stopped in cashing in at every challenge confronting the government.

In all these, Justine Kodua has managed to suckle in both internal and external heats from his party’s members, especially at this time that majority members of parliament from his party have risen up against their own Finance Minister, Ken Ofori-Atta, over the management of the economy.

Maybe as a leader in the NPP and to some extent having access to cabinet meetings, Justine Kodua has grown quickly to understand what it means to keep that bridge between party and government intact at all times, something I dare to say was lost on the former administration.

Learning from that dichotomy of how political power structure can easily forget that, it was from the party that the government was formed, he has made it a point to step in to mediate the various interests groups in the NPP especially at this time in the history of the country when everything sector is under pressure because the managers of the economy have not done well.

From my own observations, I want to believe that Justine Kodua appreciates that, if the party is left to be taken over by the hawks in the party now, it will be difficult for anyone with a moderating view to ever emerge to bring sanity into the government and by extension the party which may have to fight for political power in all future elections. Based that inclination, he has had to managed both the needs of the hawks and the technocrats who do a lot more of the thinking and strategizing for both government and party from further embarrassment.

In less than a hundred days in office, Justine Kodua has had to tread cautiously the thine line of power, expectations and delivery while keeping in mind that, the government has in many ways just two years left to turn things around for Ghanaians.

And let no one kid anybody, the situation in the country currently is very dire and I want to believe that this is the time for some of the voices of moderation in our society to come up and speak to the minds and hearts of Ghanaians while the political establishment works to ameliorate the sufferings of the masses.

Apart from aptly putting in place the new structure for the NPP after their national delegates conference in a record time, Justine has moved to consolidate his power in the party thanks partly to the kinds of resource professionals around him who’s advice and counsel to him is yielding results in both government and party.

First, composure when the agitations from the 80 members of his party’s presser calling the bluff of the president to sack the Finance Minister or forget their participation in any business of government brought before the house. This move by the 80 MP’s was seen as a novelty as no president or government under the Fourth Republic has seen this type of rebellion before if my memories serve me right even though I stand to be corrected.

Under the parliamentary system of government, NPP MP’s actions would have ended in the collapse of a government, but even under that this dispensation, their move welcomed by many political watchers who have minced no chance but to chastise this parliament for not holding their side of the governance process to strict scrutiny for the interest of the public.

An almost divided parliament in their view should be doing something different but to them, those things were not happening. Therefore, when the call was made to the president, Justine knew he was in trouble and he saw the move as a call to duty because for him, to allow for all the pressures to go to the president and the establishment alone would not just be suicidal to the government, but it was also going to impact the party negatively in its bid for future political power.

Not to pretend to not know the threats by MP’s from his own , he waited for a while watching the political maneuvering of their major opponent in parliament in this case the NDC in this case sucking in all the heat from the confusion while at the same time mapping out a response that will be favorable to everyone.

And in politics, if you are offered the red meat, you don’t just reject it because its coming from your opponent and that’s exactly what the NDC did by cashing in on the confusion that had engulfed managers of the country and economy.

The NDC fast forward moved a motion of censure against the Finance Minister which many thought was to be an easy one for the NDC, but that move created an opportunity and Justine quickly move in issuing a statement to the effect that, the majority side will not support it damn the political consequences.

The new directive meant the Speaker had no choice but to rule on the motion of censure by establishing an ad-hoc committee to investigate the Finance Minister over the diversion of some monies and engaging in conflict of interest allegedly.

Even as the nation awaits outcome of the report from the ad-hoc committee, another surprise was sprung on Ghanaians under the signature of Justine Kodua Frimpong announcing the participation of the all NPP MP’s in the 2023 budget presentation possibly by the Finance Minister Ken Ofori Atta while he still maintains that the call by the MP’s for the head of the Finance Minister still remains valid.

Like him or hate, Justine Kodua’s mark on his office is commendable and its very important that, the opposition NDC takes note of these major successes chalked by him and hopefully map out a strategy to counter him effectively in 2024 by electing a person to match him boot for boot because he has proven to be not an easy walk-over person at all.

In all situations, it’s the interest and development of the country that must remain paramount to all of us irrespective of which party is in government at any time.