One person has been confirmed dead by the medics at the Komfo Anokye Teaching Hospital a week after sustaining gunshot wounds during a clash.

Residents of Bibiani and Anhwiaso, both districts at Sehwi, clashed during a ritual performance to allow Asante Gold Corporation to commence operation.

The districts were divided over which authority to lead the ritual performance and youth of Bibiani prevented the Ahwiaso traditional area from the cleansing rite at the River Mensin to pave way for the large scale mining.

The Bibiani youth argued that if the rituals were performed by the people from Anhwiaso, the youth from Bibiani would not get jobs from the company.

The challenge quickly degenerated into a heated argument between the youth and the delegation from Anhwiaso Traditional Area, with the former insisting it is the chief of Sehwi Bibiani who has the right to perform the rituals.

In a heated argument, some of the youth were hit by stray bullets. Two were left in critical condition.

Three others were treated and discharged for gunshot wounds while scores sustained wounds and bruises from machetes and stone pelting.

Information gathered by Adom News indicated that one Ibrahim Adams, who was among those in critical condition at the Komfo Anokye Teaching Hospital, has been confirmed dead.

According to the sources, the deceased, a Pragya rider, was not involved in the clash, but was plying the route after dropping off some passengers. 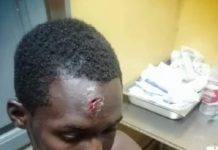 Panic as boxer slumps and dies during training