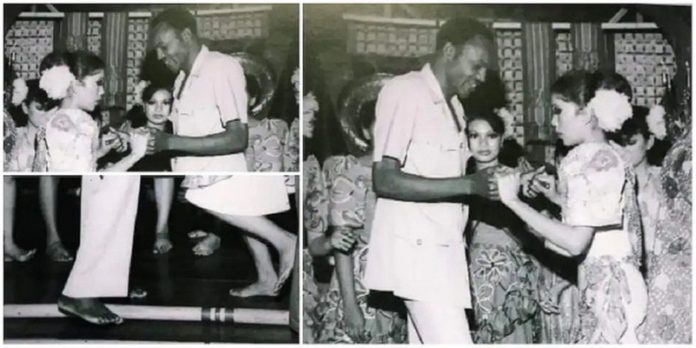 Nigerians on social media have reacted to an old image of young Buhari dancing with an unknown woman.

The rare photo was shared on the social media platform, Facebook by a user named Ayo Ojeniyi. Details such as the day and location the image was taken weren’t stated.

In the photo, young Buhari was dancing barefooted with the young white lady.

The caption to the photo reads: “PMB was very sociable while growing up. Nowadays, he keeps to himself !!! See him digging it out in a party when he was young!!!!”

President Buhari wore a smile as they dance while other ladies present watched.

Adams Yusuf wrote: “You tend to be humble and be calming down when you are aging.
Other cute ladies are still waiting for him to dance with them. Na wao!”

Hadjia Rasidat wrote: “This is real Buhari, the one we have now is from Sudan.”

Segun Fagbemi wrote: “He should have stay retired. The worries of today Nigeria is beyond his scope and energy.”