Leader of the United Progressive Party (UPP), Akwasi Addae Odike, has invoked dreaded deities on the the ruling New Patriotic Party (NPP) and Electoral Commission (EC) boss, Mrs Jean Mensa for orchestrating his disqualification ahead of the December general election.

“I know the NPP used the EC boss to disqualify me and I swear if nothing happens before December, then God does not exist,” he fumed in an interview on Adom FM.

The failed presidential aspirant and four others have been disqualified on issues relating to alleged forged signatures.

Their cases, according to the EC, have been forwarded to the Police Criminal Investigations Department for further investigations.

Justifying his conduct, he claimed the NPP, led by NPP Ashanti Regional Chairman, Bernard Antwi Boasiako, popularly known as Chairman Wontumi in 2019, said they won’t allow him to contest the 2020 elections.

“The NPP planned this in 2019 so I’m not surprised. They just used Jean Mensa to execute it,” he said.

He maintained that, his disqualification from the presidential race is politically motivated.

“Akufo-Addo and NPP are micro-managing the EC and they use dubious means to get rid of me. They did it in 2016 and they have succeeded again,” he fumed.

The UPP leader claimed the EC called all those who endorsed his nomination forms yet went ahead to disqualify him.

“I know the EC Chairperson was under pressure because she knows I did not forge any signature. The people are real,” he stated in an interview on Joy News Monday.

He said he might seek legal redress to avert a future problem.

Meanwhile, the EC explained that the GHS100, 000 filing fee will be refunded to the said candidates in line with the rules surrounding the process. 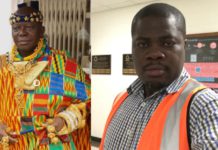