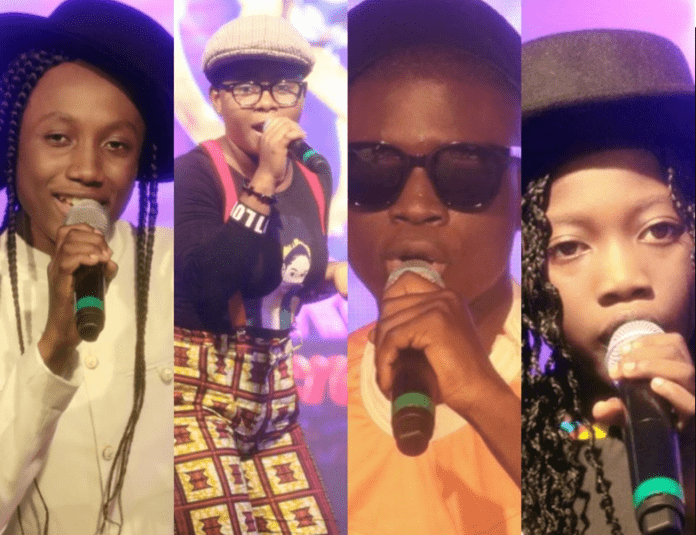 The kids were full of themselves and performed without pressure because it was an eviction-free week unlike the previous one where some fans were saddened by Dorithy Baffoe Aikin’s exit.

Grace Adom Sarkodie rolled up the curtain with late highlife musician Daasebre Gyamenah’s ‘Still I Love You’ song. She thrilled the crowd with her soothing voice and Kente attire.

The second to mount the podium was Gillgod Arthur who emulated music legend Daddy Lumba by performing his ‘Ye Ntie Obia’ hit song.

Clad in a white linen and wearing long braids for his showdown, Gillgod amazed the crowd and judges with his turn.

His energy and demeanor on stage could be compared to none of the contestants on Sunday night.

Stephen Nyameke got the auditorium heated up with his sterling performance of highlife musician Papa Yankson’s ‘Okukuseku’ song.

The visually impaired contestant continued to wow the crowd with his exceptional talent until his cap fell off his head.

Bisa Kdei came into the picture when Nsoromma kid Millicent Asomaning grabbed the mic to perform his ‘Mansa’ hit song.

She was on top of her game as she looked onto the cheering crowd.

Her casual outfit synced with her choice of song and her dance moves complemented her outstanding performance.

‘Double’, Christy’s song always does the magic regardless the atmosphere, hence, contestant Reniel Aboagye decided to perform it in her lovely casual outfit.

The 10-year-old kid got the judges, Akwaboah Jnr and Akosua Agyapong, marvel at her style as the competition inches closer to the final stage.

Queenmiracle Awinini followed up clad in her traditional cloth. Her performance was tagged one of the best on the night by Judge Akwaboah.

Jumping onto contemporary highlife song ‘Come and See My Moda’ by MzVee, Queenmiracle did more than well. Akwaboah advised her to pay mind to acting as she fuses it well with her music craft.

Meanwhile, Josephine Frimpong set the record as the only Nsoromma kid to celebrate her birthday after she performed Kofi B’s ‘Kwesi Aboagye’ song.

As she climaxed her performance, Adom TV’s Sister Sandy stepped up the stage and presented a birthday cake to her.

He was awarded a token by judge Akosua Agyapong.

Aba Afrima Abaka rolled down the curtains with ‘Koforidua Flowers’ song by Kofi B. She gave patrons memories to discuss with her awesome showdown.