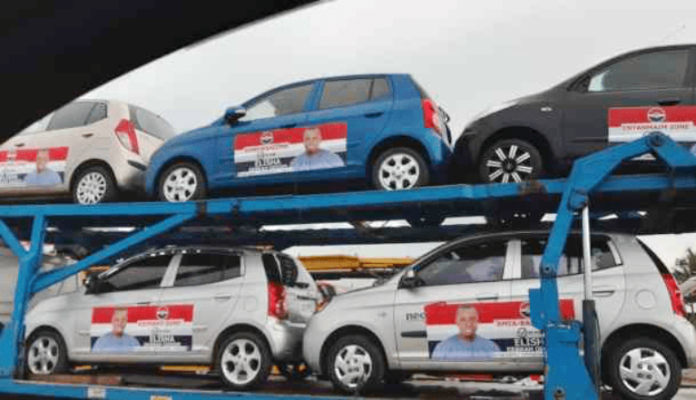 The hope of some New Patriotic Party (NPP) delegates at Ajumako Enyam Essiam constituency in the Central region of getting cars to their zones were dashed after an aspirant failed to deliver as promised.

Parliamentary hopeful in one of the 100 orphaned constituencies of the NPP, Elisha Debrah Odoom had promised to donate saloon cars to all 10 zones and one to the constituency office if elected candidate.

To prove his seriousness, he brought all the 11 cars to the venue of the parliamentary primaries held on Saturday September 28,2019 as part of his campaign strategy.

However, when the votes were counted, he polled 67 votes as against his closest contender, Rashid Kwesi Etuaful who polled 411 votes.

at the end of elections, a confident Elisha had lost to key contender who polled 411 leaving only 67 votes for him.

This humiliating loss, according to freelance journalist, Yaw Boagyan caused Mr. Odoom to order the cars to be taken back to Accra.

He said the delegates expressed shock at the conduct of Elisha Debrah Odoom whom they claimed had earlier promised to support the party at all times.

“They expected him to even donate one of the cars to the constituency office to show his commitment to the party since this is his first contest” Yaw Boagyan added.