Tension is still brewing in the Subin constituency of the Ashanti ahead of the New Patriotic Party‘s (NPP) constituency elections.

Some aspirants have reportedly moved to stop the electoral process over allegations that the party’s leadership breached processes to hold delegates’ conference.

Already, some aggrieved persons who were not satisfied with the polling station election have placed an injunction on the constituency polls.

Aspiring Chairman, Mark Kyei told Adom News the date for the election was set in less than 24 hours.

He alleged that, the album for the elections does not include names of qualified people thus should be used to conduct the elections.

Mark Kyei swore to fight until the right thing is done.

In March, an irate group locked up the Subin party office over claims that their names have been removed from the polling station album.

Meanwhile, there is heavy police deployment on the ground to restore calm. 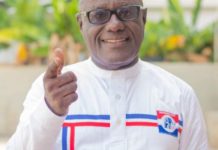 I paid GH₵1,000 to each delegate but I still lost – Wontumi’s contender [Audio]