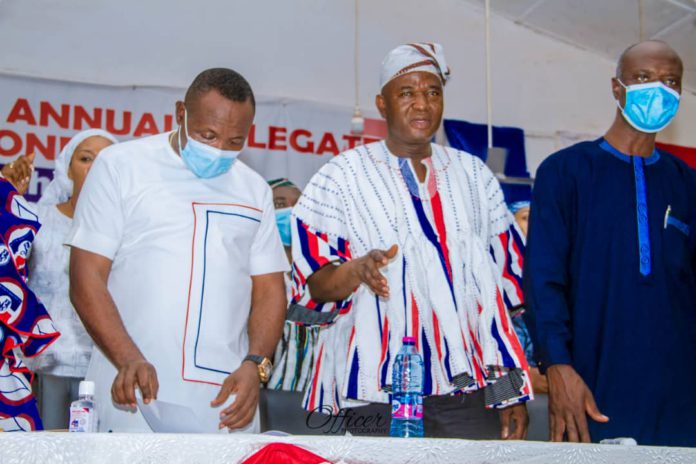 The New Patriotic Party (NPP) in the Northern Region on Tuesday held its Regional Annual Delegates Conference at Yendi zone 1 and Nyankpala zone.

The conference was held in conformity with Article 9 of the party’s constitution.

The zonal congress was to ensure Covid-19 safety protocols are observed.

Speakers at the events eulogised the contribution of the Northern Region to the success of the elephant party in the 2020 polls as the party snatched some parliamentary seats, including Mion and Tatale-Sanguli constituencies.

Fred Oware, led a delegation from the Vice President, Dr Mahamud Bawumia’s office to join the party’s general secretary, John Boadu, and other dignitaries for the congress.

Mr Boadu, speaking at the event, acknowledged that but for the Northern Region the situation of parliamentary numbers would have been dire.

Excited Mr Boadu said, NPP now constitutes the majority in the regions in the North as the party controls 16 out of 31 constituencies.

He lauded the performance of the regional chairman and the team and promised to work with them to do more ahead of the 2024 elections to help the party break the eight.

The Tolon Member of Parliament (MP) and Deputy Majority Chief Whip, Habib Iddrisu, spoke on behalf of the parliamentary caucus in the region.

He said it on the back of such performance that all the nine MPs from the region were not left out of appointments to various portfolios.

Mr Habib assured the regional and constituency executives that they will work hard so that the party and government will continue to reward the region’s effort at the polls.

He, however, assured delegates at the conference and the party in general that whether on the ground or not, together with leadership, they will do everything possible to motivate supporters in all constituencies to deliver more seats in coming elections.

Finally, the NPP Regional Chairman, Mohammed Batima Samba, said, the listening nature of himself and the executives bore the fruits the party is witnessing now.

The Chairman believed that a demotivated party force will not achieve the desired results at the polls and he assured delegates at the conference that the needs of supporters will always be his topmost priority for more better than previous results.

The conference ended successfully with the presentation and adoption of the reports of the regional treasurer and secretary.

Participants also affirmed the decisions of the Regional Executive Committee in appointing Mr Yussif Danjimmah and Mr Toyibu Yussif to the vacant positions of Deputy regional secretary and treasurer respectively.