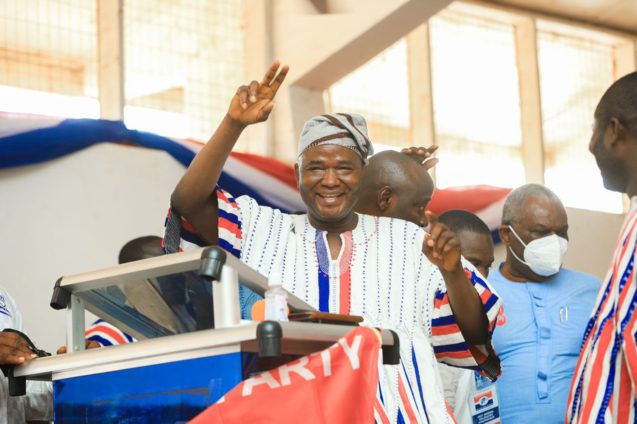 Northern Regional Chairman of the governing New Patriotic Party (NPP), Mohammed Baantima Samba, has made a cash donation of ¢720, 000 to party executives across the 18 constituencies in the region.

Each of the 18 constituencies is expected to receive a total amount of GHS40, 000 to enable them efficiently and effectively conduct party activities in their respective localities.

The personal support, according to the chairman, is to empower the party structures in the region towards breaking the eight-year governance electoral cycle in the country.

He made the presentation during the NPP’s regional delegates conference of the party at Nyankpala in the Tolon constituency on Tuesday, October 5 in the Northern Region.

In his welcome address, Chairman Samba said the spectacular performance of the NPP Regional Executives together with its constituency party executives and the various polling station executives enabled the party to recapture political power for President Akufo-Addo.

He, however, charged the supporters to unite towards breaking the eight in the 2024 general election.

He added that “I want to prepare your minds to go back home and know that your solid Regional Chairman is behind you. You have delivered and you’re the same people I will take to war to win the 2024 elections so that we can break the eight.”

Meanwhile, in accordance with the Covid-19 safety protocols, the NPP held the Annual Regional Delegates Conference at two separate venues.

The first session was organised in the Yendi constituency earlier on Tuesday for nine constituencies within the eastern corridor enclave.

The other nine constituencies later in the day had their conference at Nyankpala in the Tolon constituency.