A 26-year-old man, Oheneba Emmanuel Kwaku, has been sentenced into prison custody for 12 months for impersonating staff of the National Identification Authority (NIA) and defrauding several unsuspecting residents of sums of money.

The Suhum Circuit Court Presided over by Her Honour Efua Eddison subsequently convicted and sentenced Oheneba Emmanuel Kwaku into prison custody on his own plea.

Mr Oheneba was standing trial for impersonating an official of the National Identification Authority and issuing fake Ghana Cards to unsuspecting victims at Obretema in the Suhum Municipality Akookoo in the Abuakwa South Municipalities of the Eastern Region for a fee respectively.

Oheneba charge his victims between Ghc 30.00 and Ghc 50.00 for each fake card issued.

The NIA Suhum Municipal Registration Officer Mr Stephen Asukpa Odame explained that the accused was moving around Community Information Centers in the rural part of the two Suhum and Abuakwa South soliciting money from people to facilitate the issuance of Ghana Cards for them.

He was successful in his operations and issued some fake cards to his victims but was apprehended by the police in a Collaborative effort with the Suhum NIA office.

He called on Ghanaians to make use of the District Offices centred in the District capitals across the country. 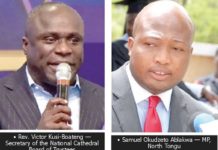