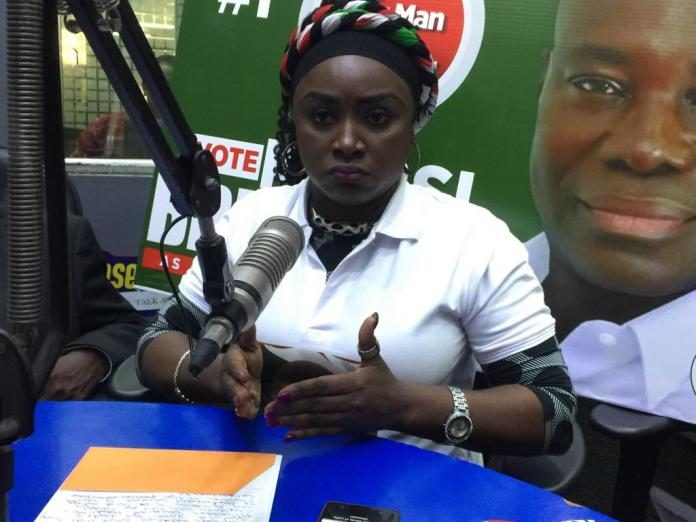 The women’s wing of the opposition NDC is demanding the Director General of Police CID Maame Tiwa Addo-Danquah produce the missing Taadi girls or resign.

The CID Boss recently announced the police know the whereabouts of the three kidnapped girls.

The girls have been missing for more than 200 days. Addressing a press conference to mark Mother’s Day, NDC Women’s Organiser Dr. Hannah Bissiw said the party will begin collecting signatures in the next seven days to bring pressure on government to rescue the girls.

“The CID boss, Tiwaa Addo-Danquah to produce the 3 kidnapped Takoradi girls in the next 14 days or resign from office” she stressed.

Ladies and Gentlemen of the Media, I bring you greetings from the National Women’s Wing of the National Democratic Congress, and I thank you for honoring our invitation to this urgent media encounter.

On this special day, the NDC celebrates all Ghanaian mothers for their immense contributions to the growth and development of our Country. Happy Mother’s Day to all mothers in Ghana, Africa and the world.

The National Women’s Wing of the NDC dedicates this year’s Mothers Day Celebration to all Ghanaian mothers whose children have been kidnapped or their husbands brutalized and/or killed, as a result of the increased spate of insecurity and lawlessness under the Akufo-Addo government.

We make special reference to mothers of the three (3) kidnapped Takoradi girls: Ruth Quayson, Priscilla Blessing Bentum and Priscilla Koranchie; the widow of investigative journalist Ahmed Suale; and the wives of the male victims of the state-sponsored brutalities during the Ayawaso West Wuogon bye-election. We commiserate and solidarize with all of these negatively affected women, who are direct victims of a wider problem of insecurity and lawlessness facing our country today.

THE THREE (3) KIDNAPPED TAKORADI GIRLS
We have observed with much pain, the alarming rate of kidnapping of children across the length and breadth of Ghana in the last two (2) years. More than ever, the security and dignity of women in Ghana and especially that of our children are under threat. As the women’s wing of the National Democratic Congress, a party noted for its commitment to the welfare of women and children, we cannot gloss over the recent increased spate of kidnappings that is largely targeted at children and women in our country.

About nine (9) months ago, three (3) girls – and I mention their names again – Ruth Quayson, Priscilla Blessing Bentum and Priscilla Koranchie were reported kidnapped in the Western Region, specifically Takoradi, leaving their parents depressed and the whole country in shock.

Amidst this storm was the resolute hope of all Ghanaians that the Minister for Gender, Children and Social Protection Hon. Cynthia Morrison as well as the Criminal Investigation Department of the Ghana Police Service headed by Mrs. Tiwaa Addo Danquah, were going to do everything possible to rescue the innocent children. Interestingly, after several months of empty assurances from the outfit of the Gender Minister and the Police CID boss, the children are still nowhere to be found.

More than a month ago, Ghanaians woke up to breaking news that the location of the kidnapped girls was known; additionally we heard of exhaustive plans to safely bring them back to expectant Ghanaians and their emotionally traumatized parents. This pledge was made when the CID boss Mrs. Tiwaa Addo Danquah addressed the nation through a press conference on the 2nd of April, 2019.

Adding to the theatrics surrounding this whole mystery is a publication in the Daily Guide, a newspaper owned by the current National Chairman of the NPP which claimed that, Ruth Quayson, Priscilla Blessing Bentum, and Priscilla Koranchie were safe in a private medical facility in the capital city Accra. The alleged news by the “Daily Guide” on the 23rd April 2019 explained that the young girls were rescued and transferred to an unknown BNI Clinic, with one of them sent to the 37 Military Hospital for medical tests. This newspaper headline was followed by a response from the Ghana Police Service which flatly denied the Daily Guide publication.

Fellow Ghanaians, the women’s wing of the National Democratic Congress is highly disappointed in the fact that, the kidnapped girls have neither been found nor has any sufficient intelligence been gathered on their whereabouts. The National Democratic Congress is saddened by the overt display of unprofessionalism by Mrs. Tiwaa Addo Danquah, which beyond exacerbating the pain of the relatives of the girls, also denigrates the professional standards of the Ghana Police Service. The irritating quirk of telling lies by the CID boss must not be encouraged or entertained by the good people of Ghana. Neither should the comedy of errors by the Akufo-Addo government on a matter of such prime national importance be tolerated for a day.

Ladies and Gentlemen, what happened to Mrs. Tiwaa Addo Danquah’s stance that they indeed knew the whereabouts of the missing girls and their safety? What about recent pronouncements by the spiritual father of President Akufo-Addo, Prophet Owusu Bempah that he knows the whereabouts of the kidnapped girls but will only disclose that information at the instance of the President? Shouldn’t the CID boss and the spiritual father of the President be the subject of investigations relative to this matter?

Ladies and gentlemen, we understand the recent excitement and jubilation of President Akufo-Addo upon the unexpected victory of his English team “Tottenham Hotspurs”; yet we expect him to equally be zealous about the security and safety of the ordinary Ghanaian who voted him to power. It is our hope and belief that this year’s celebration of motherhood would be a moment of sober reflection for President Akufo-Addo, the CID boss, Mrs. Tiwaa Addo Danquah, the Minister for Gender, Children and Social protection, Hon. Cynthia Morrison on the urgent need for them to find the missing girls and reunite them with their grieving mothers and families.

JUSTICE FOR THE WIDOW OF AHMED SUALE
Ladies and gentlemen, the women’s wing of the NDC is deeply worried about the failure of the Akufo-Addo government to resolve the gruesome murder of investigative journalist, Ahmed Suale. We wonder why till date, a prominent member of the NPP, Kennedy Agyapong, who threatened Ahmed with harm and death before his untimely murder, is still walking the streets of Ghana as a free man. If government was serious about the rule of law, Kennedy Agyapong should have been standing trial, at least for his reckless act of publicly threatening Ahmed Suale with harm and death. On this special day, our deepest sympathies go to the widow of Ahmed Suale and her children. The women’s wing of the NDC demands nothing but justice for the poor widow and her children. The blood of such an illustrious son of the land must not be spilled in vain, for his surviving wife and kids to suffer.

JUSTICE FOR THE WIVES OF THE MALE VICTIMS OF THE AYAWASO WEST WUOGON (AWW) STATE-SPONSORED BRUTALITIES.
Also, our deepest commiserations go to the wives of the male victims of the state-sponsored AWW violence who have been neglected by the Akufo-Addo government. It is a sad fact that till date, the perpetrators of the violence, most of whom were captured on video are still walking free. The failure of the Police to arrest and prosecute the perpetrators through our criminal justice system is a glaring blot on this administration. Also, the failure of the Akufo-Addo government to publish the Emile Short Commission report and act decisively on their findings has not helped matters.

CONCLUSION
In conclusion, we submit that it is the weak leadership and insensitive posturing of President Akufo-Addo that has emboldened criminals and increased impunity in Ghana today. Indeed, what has become the norm today is for the state to rather back criminal elements and their actions, whilst trying desperately to quell and suppress critical voices of dissent.

We however wish to serve notice that, the National women’s wing of the NDC will be collecting signatures in the next 7 days for a petition to the President, the IGP, the CID Boss, the AG and other International agencies demanding for:

And make Ghana safe for all women, our children and our husbands.

May God bless our homeland Ghana. Thank you for coming.