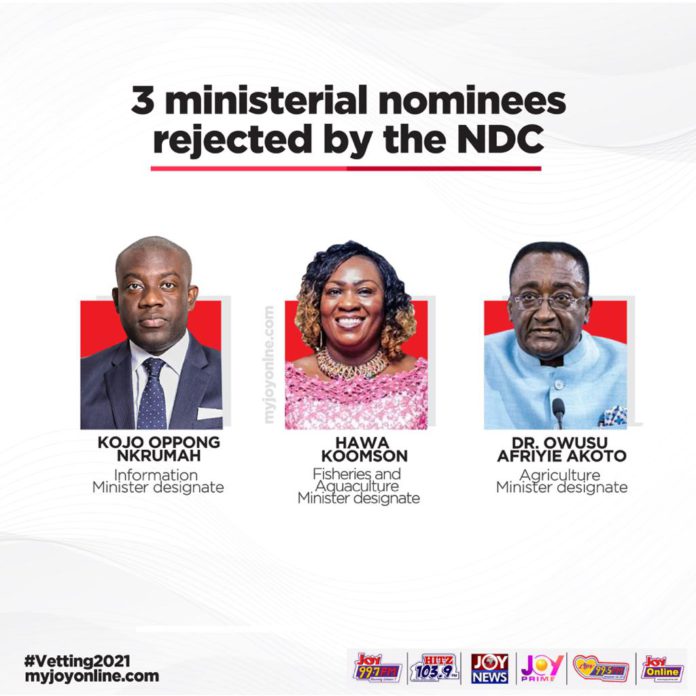 A former National Coordinator of the Tertiary Students Confederacy (TESCON), a student wing of the governing New Patriotic Party (NPP), has described as “totally absurd” the rejection of three ministers-designate after their “successful” appearance before Parliament’s Appointments Committee.

‘General’ Isaac Acheampong said the decision by the National Democratic Congress (NDC) Members of Parliament (MPs) will not amount to much since the approval of the ministers-designate rests on the plenary where the NPP wields the majority.

“In fact, what the NDC MPs have done is seriously much-ado-about-nothing and it is part of a sustained attempt to deceive their followers after their disappointing loss at the 2020 presidential poll,” he said.

The 13 NDC lawmakers, who are part of the 26-member committee, said the responses of the three nominees to some specific and public interest questions were false, unsatisfactory and disappointing.

On Dr Akoto, the Minority legislators said: “The Minister-designate for Food and Agriculture was untruthful under oath to the Committee on the circumstances leading to the abrogation of the Fruit and Export Terminal Contract of 2015 by GPHA on his express instructions as contained in a letter dated 11th January 2021.”

On Mr Oppong Nkrumah, the verdict of the Minority was that: “The Minister-designate for Information was not the least candid with the committee on the multiple infractions of the law leading to the Bank of Ghana’s revocation of the license of Oval Microfinance – a company in which he was 83% majority shareholder.”

Writing on Mrs Koomson, the NDC MPs said: “The Minister-designate for Fisheries and Aquaculture Development could not provide convincing grounds for the shooting incident during the Voter Registration Exercise in Kasoa on 20th July 2020, though we acknowledge her belated apology for her recklessly dangerous conduct.”

Touching on the reasons cited by the NDC legislators for the rejection of the three nominees, Mr Acheampong said the opposition lawmakers are “wasting the time of the Ghanaian taxpayer.

“While the government of His Excellency President Nana Addo Dankwa Akufo-Addo is looking at speeding the development of Ghana, these MPs in the name of politics and for cheap political goal are trying to pull the whole nation back.”

The longest-serving National TESCON boss has appealed to NPP lawmakers to stand their ground and ensure the approval of the three nominees. 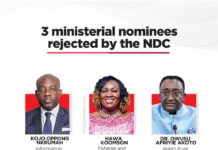 We have no power to reject nominees – Appointments Committee Chairman