Mr Chaie has decried the MCs, Catherine Afeku and Lord Commey’s attitudes, describing them as destructive in conduct thereby not allowing the conference to run smoothly smoothly.

He said the duo deliberately spoke as the NDC delivered her solidarity message.

Mr Tetteh Chaie who was speaking as guest on Adom TV’s Badwam show also described the participation of the NPP’s supporters in the occasion as “not encouraging”.

“The sort of excitement, participation and morale you expect at such events were not there due to apathy amongst Ghanaians,” he noted.

The event, which took place at the Trade Fair Centre, La in Accra was addressed by President Akufo-Addo and other Stalwarts of the party with goodwill messages from other political parties. 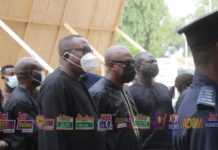