A private legal practitioner is urging the security to be on red alert following the protest against the controversial Defense Cooperation Agreement between Ghana and the United States.
Dr. Eric Oduro Osae said the demonstration could be a catalyst for a coup d’état following the treasonable comments made by Deputy General Secretary of the opposition, National Democratic Congress (NDC), Koku Anyidoho.
RELATED STORY: Koku Anyidoho charged with treason
Mr.  Anyidoho was arrested and charged with treason for declaring that there will be a civil coup to remove President Akufo-Addo following Parliament’s ratification of the controversial military agreement.
He hinted the NDC and other civil society groups will hit the streets to expressed their displeasure about the ratification of the bill
In spite of Koku Anyidoho’s arrest, scores of discontent Ghanaians on Wednesday March 28, 2018 hit the principal streets of Accra to protest the military deal.
RELATED STORY: PHOTOS: Anyidoho’s arrest: Police clash with NDC supporters; one shot
But on Adom FM’s morning show Dwaso Nsem Wednesday, Dr. Oduro Osae called on the police to monitor events to foil any security threats.
He maintained that, detailed security intelligence will show whether the demonstration will be the “beginning of a big revolt”.
RELATED STORY: Anyidoho arrest: We’re not scared – Portuphy
“Any comment that can affect the security of this country should not be taken lightly.  The security must do serious scrutiny to curb any coup”, he added.
Dr. Oduro Osae commended the police for allowing the NDC exercise its constitutional rights. 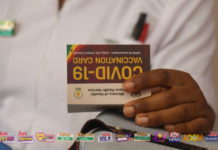