The National Commission on Small Arms and Light Weapons has condemned the use of arms at some centres in the ongoing voter registration centres.

The Commission says gun violence is not an option for the resolution of internal political disputes for a country like Ghana that has embarrassed democracy.

“As Ghanaians, we should eschew violence and rather promote peace tolerance and dialogue, powerful means that can be used to enhance our democracy, advance our socio-economic development and transform our society for our collective well-being,” a statement signed by Board Chairman of the Commission Rev Prof Paul Frimpong Manso said.

The ongoing voter registration has been characterised by some instances of violence with the most recent being the firing of an arm by Special Development Initiatives Minister Hawa Koomson.

The exercise has also witnessed violence at other centers including registration centers in the Banda Ahenkoro and Asutifi South Constituencies.

The Commission, however, has condemned the act insisting that intolerance and violence must not be tolerated in the ongoing exercise.

“We cannot kill or maim one another in the name of fighting for Political power we must see our political opponents as partners in development.

“The commission strongly believes that intolerance and violence are acts that should not be tolerated by any society and as a people, we should detest gun violence regardless of where it is coming from because of its destructive nature.

“Ghanaians should cherish the ideals of a free and democratic society in which all people live together in Peace Harmony and with equal opportunities,” the statement further said.

The Commission, therefore, is calling on the political parties to exercise the utmost restraint even in the face of extreme provocation.

“For it is clear that any situation or country that thrives on violence and use it as a means to resolve differences would ultimately be the loser, as no conflict has ever been resolved through the barrel of a gun,” it said.

The Commission further urged Police authorities to take charge of the matter.

“We also call on the Ghana Police service to be even-handed in this turbulent times that seek to breach the Peace of the country any partisan approach can have serious repercussions for our collective peace and security that commission abuse to the police to deal with the bitrate is in accordance with the law without fear or favour.

“The Small arms commission further entreats political actors to allow the Electoral Commission’s laid down procedures in addressing any misgivings or misunderstandings rather than resorting to the use of guns. 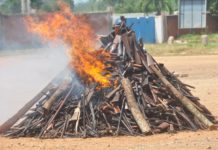