A married medical doctor who is currently fighting for her marriage has shared a heart-wrenching divorce story about how her husband of 14 years was seeking a divorce after he used her to achieve his ‘children making’ sinister plot.

In recounting the issue on the Facebook page of David Papa Bondze-Mbir, the 43-year-old medical practitioner who was left confused and heartbroken said she did not know how to take the news.

She also made some serious revelations as she opened up on the details of the divorce which to her were ‘flimsy’ to say the least.

Her story read, “My husband just handed me an envelope: Divorce papers. We’ve been married for 14 years, and I am 43 years old now. It’s not the divorce papers that’s troubling me.

It’s his reasons for this separation. He’s telling me that he’s been unfaithful to me all these years, which, I had no idea of, until now that he’s informing me.

Another reason he gave was that he needed a certain kind of children (beautiful, intelligent and tall offsprings). I am a medical doctor, and I am tall and very beautiful (I’m told).

He is seeking a divorce now because he needed me to mother and nurtures the behaviour of his kids to certain teenage years. We have Two (2) kids together.

READ ALSO: There are more ‘killers’ of my son, go after them – Father of Late Major Mahama

It’s rather unfortunate I wasn’t able to get any of his confessions on tape, for evidence sake. I’m very shocked because it looks like it’s been a calculated plan well executed. My husband tells me, he’s been with his first, true love, who he is not married to, because she’s barren (He forced her to abort Three pregnancies for him in their SSS and University days, and the effects of it has affected her womb). This Woman he is referring to – brought up the idea of him marrying someone else to rather have kids with. My husband told me that also.

They live in a house my husband calls ‘his home’, which I had no idea of. All along, I thought this Five (5) bedroom house we live in was his only house. He’s moved all his belongings out of our matrimonial home, and moved to his other house – to be with his other woman.

Do I grant him a divorce? How do I even inform our families about it? It’s so humiliating, I honestly don’t know the way forward. Dave, who would even marry me at my age? My husband has left me thinking and heartbroken.” 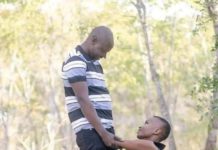