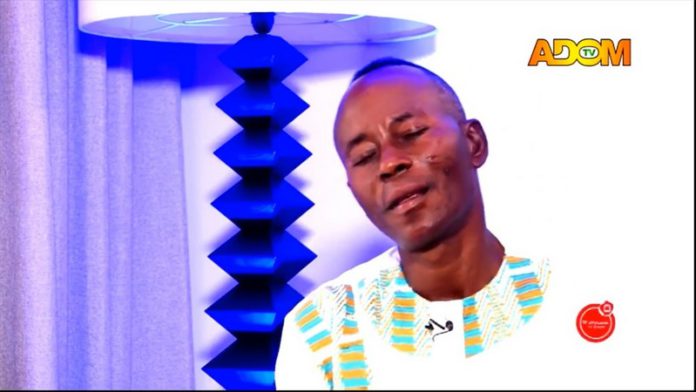 One of the finest Seventh Day Adventists (SDA), Baffour Kyei Mensah, has opened up to Ghanaians about his personal life and upbringing.

According to him, he was born into an idol-worshipping family who served ‘Tsigali’.

As someone whose grandfather was the one who brought the lesser god into the family, he [Baffour Kyei] was the one to take over after the former’s death.

But God’s mighty hand saved him on a day some SDA members came to sing in his area, a performance that could not get off his mind.

“While worshipping the idol, I was also allowed to go to any church of my choice but I didn’t really understand Christianity until the SDA people came.

“I was about 11 or 12 thereabout and I followed them while they sang and that was the turning point for me. I even had to feign sickness on Saturday when asked to go to the farm just so I could attend service,” he narrated on Adom TV’s M’ashyase3 with Afia Amankwa Tamakloe.

However, the musician indicated some relatives and fellow idol-worshippers became angry at a point as they could not fathom why he will abandon his duties to the idols.

On the back of this, he became a burden especially as his parents were in Wassa Akropong but God who knew the plans he had for him made a way.

He explained some SDA members who realised how fond he had become of the faith took him in and nurtured him to become a better person.

To him, he has never at any point regretted his decision to join SDA despite numerous challenges he has faced and will never leave.

Meanwhile, speaking on his life as a musician who has about 18 albums to his credit, he revealed his decision was borne out of the fact that it was music that brought him into the church and drew him closer to God.

Illegal Connection: ECG to clamp down on staff who support public in unlawful acts (12-8-22)