Deputy Campaign Manager of the New Patriotic Party, Dr Mustapha Hamid, has downplayed the ability of the National Democratic Congress (NDC) to fulfil its manifesto promises.

According to him, most of the promises in the manifesto are policies the incumbent government has already implemented with no room for the NDC to introduce new ones.

“They mention free primary healthcare but that is already in place because the vulnerable, aged and children in Ghana are already enjoying that while the rest of the population are enjoying it through the NHIA premium,” he said.

He was of a strong conviction that the Akufo-Addo-led government has a better and superior track record than the NDC, stating that that is what the December polls would be based on.

Dr Hamid, who doubles as the Minister for Inner City and Zongo Development, said these in an interview on Asempa FM’s Ekosii Sen.

“Their promise to increase maternity leave to four-months is fantastic but is that the fundamental need of the people? Most Ghanaian women I believe need credit facilities to boost their businesses,” he argued. 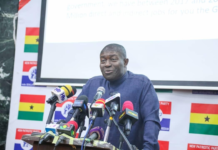