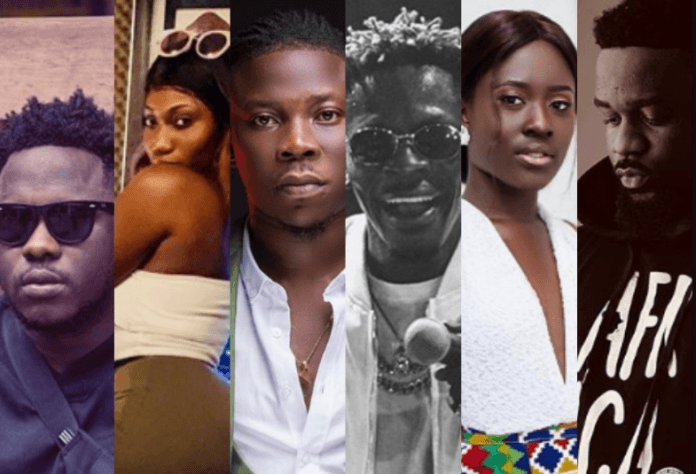 Weekend is already here and your number one online portal, Adomonline.com has put together interesting Instagram posts of some Ghanaian celebrities over the week.

Check them out below:

Kwesi Arthur shared a photo on Instagram to depict how fans are well patronising his new album Live From Nkrumah Krom Vol II in the United Kingdom .

The BET 18 nominee expressed his gratitude with the caption: “Woke up to this 🙏🏾🙏🏾🙏🏾 Live From Nkrumah Krom billboard all the way in London … keep streaming guys, let’s push the agenda.”

Rapper Medikal has teamed up with Nigerian singer, Davido,
on a song he titled Father Father. In
a post on his Instagram wall, he shared a video of himself and girlfriend Fela
Makafui jamming to it.

It was all love as some fans felt jealous as the celebrity couple showed affection to the song which has garnered over 557k views in five days on YouTube.

SEE THIS: My nose has played a role in my success – Akrobeto

Wendy in a subsequent post shared it with the caption: “When do you think I should drop this banger!!!!????? Count down starts now.”

It touched the hearts of many with fellow rapper Criss Waddle melting to it.

J Derobie, the latest sensation in the Ghanaian dancehall/reggae atmosphere shared a picture to show off his endorsement deal with Betpawaghana. He rose from nothing and is now someone many look up to and admire.

He attained the limelight through Nigerian musician Mr Eazi’s Empawa platform and his new Irie reggae song is a must-checkout.

He said: “My studio ready for commercial use now!! Thank God we got here. Shattamovementrecords.”

After facing severe criticisms on social media for going partially nude, Akuapem Poloo decided to shade haters with awards she has won with her infamous gestures.

According to her, critics don’t get to her because ‘fooling’ and exposing flesh has reaped her all the awards and connections in her life.

She captioned it: “Fooling achievement four awards in a year thanks @ghananaijashowbizawards @umbgta2019 @fashionandlifestyleawards @cbazeawards thanks for believing in me.”

Fela Makafui proved she’s hardworking by naming the number of online businesses she runs. She has been productive lately and her boyfriend Medikal has proved his love by supporting her wholeheartedly.

The song is currently climbing the charts and fans are yet to witness it soar up like his Kpo Keke song topped for weeks.

Sarkcess Label boss Sarkodie was part of the artistes who were billed to perform at the annual MTN Music Festival 2019 which came off in Kumasi in the Ashanti region.

He shared a video of himself performing to the awe of patrons who attended the concert on May Day on Wednesday.

Rapper Yaa Pono shared a photo of his mother and little daughter on Instagram.

He captioned it “Grand ma and her Lil one…” and some fans talked about their resemblance.

Yvonne Nelson continues to show what freedom looks like by sharing a skin glowing photo on her Instagram wall.

Yvonne doesn’t mind whether she repeats clothes or not. According to her, whatever thing that resides in her wardrobe is hers, hence she could wear them a million times if she wants.

Fans of sensational music group, La Meme gang should brace themselves up for a banger as they shared this video where Nigerian’s Wizkid is seen partying with them.

Its not clear if they are ready to collaborate or they opted to chill just after they left the studio working together.

Actor John Dumelo shows his preaching side in this post with actress Selassie Ibrahim.

Sister Derby had no caption than a chorus of rapper Kwesi Arthur off his latest album Live From Nkrumah Krom Vol II.

She posted this vintage photo in Romania.

SEE THIS: Video: I started a genre that influenced my generation – Efya

Here, in her latest post, Moesha Boduong is advising ladies to be careful of men who speak better English to con them.

According to her, independent ladies should be more careful since men can use that to deceive them.