New Patriotic Party (NPP) Member of Parliament (MP) for the Obuasi East constituency is calling for a partnership with Assin Central MP, Kennedy Agyapong to end galamsey in Ghana.

Mr Edward Ennin believes the fight against galamsey needs committed individuals like himself and Mr Agyapong who do not easily bow to pressure.

“In fighting galamsey, you must know the person’s background and pick someone who is bold and not easily enticed by money,” he urged.

Speaking in an interview on Adom FM’s anti-corruption segment, Fabewoso, Mr Ennin was optimistic they could end the menace within six months if President Nana Akufo-Addo will allow them.

“I initiated the formation of a committee to fight galamsey and was later told the Minister wants to handle it himself and look at where we find ourselves now but it is not late we can still do it if we want to,” he said.

He also urged President Akufo-Addo to up his game in fighting the menace without fear or favour.

“It is sad some people want to run down the president’s efforts but I expect the president to start arresting and prosecuting people involved to serve as deterrent,” he added.

He also assured they will not sit unconcerned for the president’s commitment against the fight to be sabotaged. 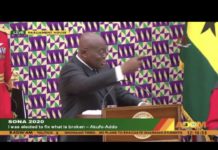