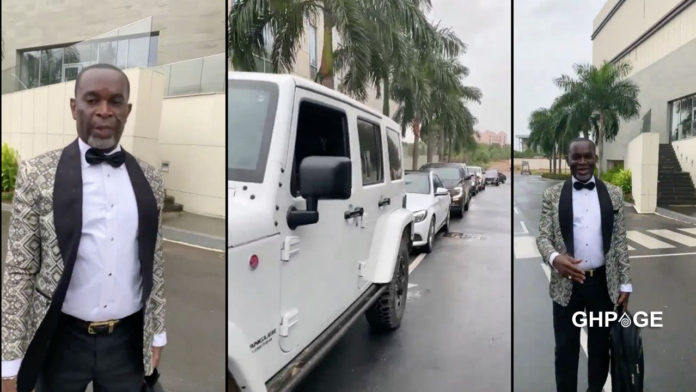 Millionaire Kwasi Dadzie aka VAL has joined the list as he tries to challenge Kwame Despite after showing off his fleet of expensive cars at his wedding.

Earlier this year, the marriage between Kennedy Osei the son of millionaire Osei Kwame Despite and his then girlfriend Tracey Ameyaw became the talk of town after the show of wealth and class.

Their wedding dubbed #Kency2020 became the marking scheme for some weddings in the country before the emergence of the coronavirus which brought the pressure on people down a bit.

Few weeks ago, the daughter of Dr Ernest Ofori Sarpong, known as Cindy Ofori Sarpong, also tied the knot with her sweetheart Richard Peprah though there was massive show of wealth it couldn’t be compared to #Kency 2020.

Well, Mr Kwasi Dadzie, who announced weeks ago that he was getting married, decided to show off at his wedding which came off recently.

According to what was gathered, the wedding was indeed beautiful as there was some level of luxury shown. The display of wealth and power were equally shown at the luxury wedding.

Pictures from the event showed the luxury cars owned by the Ghanaian millionaire.

Amongst the fleet of cars were a Range Rover, Jeep Wrangler and Rolls Royce among others.