Nollywood actor, Jerry Amilo, has shared his testimony of how God’s mercy was upon him after he was fatally injured in an accident.

The unforgettable incident happened in 1998, when the actor was travelling for an award show together with a lawyer friend.

In a video narration he posted on social media, the actor revealed he lost a front tyre, which caused the car to somersault severally.

He recounted how he succumbed to his injuries and was transported to a morgue awaiting preservation and burial.

However, with electricity being a major problem in the country, he said his body escaped the cold room experience, a situation that turned to be the life-saving one.

Three days later, he woke up in the morgue, confused when the morticians took to their heels.

Now referred to as the Nigerian Jesus, he believes he is “Embraced with love, covered in Blood of Jesus Christ, apportioned with Grace and made Whole even again.” 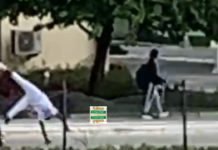