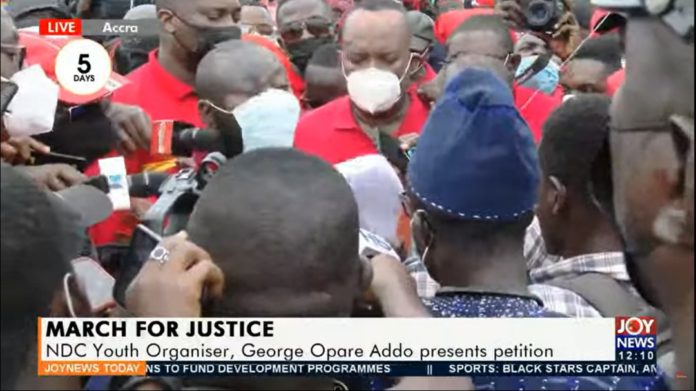 The National Democratic Congress (NDC) has presented a petition at the Jubilee House as hundreds of supporters joined in a protest on Tuesday.

The demonstration dubbed, “A March for Justice” was organised by the party’s youth wing to demand accountability and seek redress for what they say are injustices in society as well as the country’s security challenges.

The protest commenced at 6 am from the Accra Mall through Airport, Opeibea, and the Aviation roads to Jubilee House where they presented a petition to President Akufo-Addo.

Upon arrival, the National Youth Organiser, George Opare Addo, presented the petition which a Deputy Chief of Staff, Emmanuel Adumua-Bossman received on the President’s behalf.

The petition is among other things is demanding justice for persons maimed in series of violence that have occurred in the country.

The protesters are also asking for reforms and de-politicization of the country’s security agencies.

Meanwhile, the group is expected to submit the same petition to the Inspector-General of Police, James Oppong-Buanu, and Speaker Alban Kingsford Sumana Bagbin at the Police Headquarters and Parliament House respectively.