Many are feared dead after a gas tanker fell on a passenger car at Osamkrom in the Gomoa Central District, yesterday, June 2.

According to reports, the gas tanker was travelling from Accra to Agona Swedru to offload while the passenger car was also coming from Swedru heading towards Winneba.

Some witnesses said upon reaching Osamkrom prison junction, the passenger car fell into a ditch after which the gas tanker landed on it.

Attempts to rescue the trapped passengers took over four hours with no immediate success.

Eyewitness say they heard some passengers in the car screaming for help.

Officials from the Ghana National Fire Service are yet to disclose the total number of passengers who have died as they await a towing car to lift the tanker off, at the time of filing this report.

The District Chief Executive for Gomoa Central, Benjamin Kojo Oto, revealed that an ambulance has transported some of the casualties to various hospitals and mortuary.

Also at the scene was the Minister for Gender, Children and Social Protection, Cynthia Morrison, who appealed to drivers to always drive with care as the country enters its rainy season.

Meanwhile, Adom News’ correspondent Seth Adjei who is currently at the scene says personnel from the Fire service are yet to lift the tanker from the ditch.

According to him, passengers have also been left stranded as the roads remain blocked. 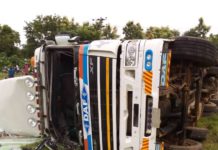