Investigative Journalist Manasseh Azure Awuni has mounted the witness box to testify as the first witness for the Special Prosecutor in the case in which the former Chief Executive Officer (CEO) of the Public Procurement Authority (PPA) is standing trial for 17 charges.

The former CEO of the PPA, Agyenim Boateng Adjei has pleaded not guilty to 17 charges by the Special Prosecutor.

The charges involved seven counts of using Public office for profit and 10 counts of directly and indirectly influencing the Public Procurement process using his office.

One Francis Kwaku said to be his in-law also denied one count of using a Public officer for profit.

Both have been granted bail in the sums of GHc5 million each with two sureties to be justified by the court presided over by Justice Mary Maame Ekue Nsenkyire.

In court on Tuesday, November 29, the trial started with the Special Prosecutor’s Office calling the investigative journalist as its first witness.

According to EIB Network’s Legal Affairs Correspondent, Murtala Inusah, Manessah who was sworn in identified a witness statement that has been filed.

However, before it is tendered in evidence, the defense lawyers have indicated they will raise objections to some portions.

Due to the absence of the lawyer for the first accused, the case has been adjourned to December 13.

All the accused persons were present in court. 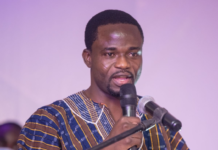