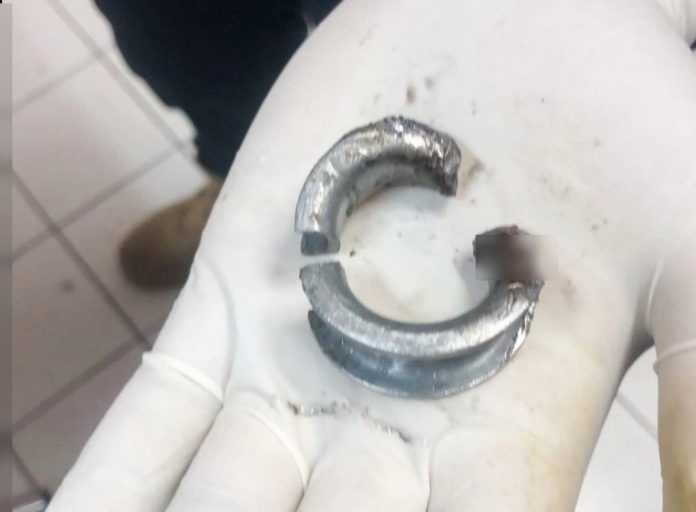 A Romeo put a steel nut on his manhood to make it bigger for a Valentine’s Day date but was rushed to hospital after it swelled dangerously for two days.

Eye-watering pictures show doctors slicing off the DIY willy enlarger with a power tool and pliers in Bangkok, Thailand.

The sheepish patient told doctors he had been excited about seeing a woman for a date on Sunday and “just wanted to impress her”.

He had heard that rings could be used to enlarge and strengthen a penis by forcing blood into the glans.

So he pulled a 3cm-wide (1.2 inches) steel nut from his toolbox and slipped it over his member using baby oil.

However the following day his penis had swelled painfully and he found he was unable to remove the ring.

He called emergency services on Saturday afternoon, having had the nut jammed around the base of his penis since Friday morning.

He told rescuers: “I was terrified that I would need my penis amputated.

“It had swollen so much that I thought it would burst.”

Paramedics took him to a hospital in the Thai capital.

Wince-inducing images of the procedure to remove the but were published in local media.

Medics got to work with a terrifying array of tools as the unnamed patient clung to the bed rails in agony.

One slid a thin metal sheet between the nut and his skin to protect it, while another began grinding with a spinning steel cutter.

They also used pliers to grip and bend the nut, until the man was finally released after 60 nerve-racking minutes.

He was given antibiotics and an anti-inflammatory cream to reduce the swelling.

Rescue volunteers said the man cried with pain throughout the hour-long cutting process.

Winai Pong said: “This was one of the strangest cases we have ever encountered.

“Most of the time it’s only people getting their finger stuck in a ring, so it was surprising when we arrived at the man’s house and he had his penis stuck in there.

“We knew that cutting the nut wouldn’t be a problem, as we used the same technique with finger rings, but we were just worried about the pain the man would be experiencing while removing it.”

The man was unable to make the date he had planned with a girlfriend on St Valentines Day.

But doctors said his misadventure had not left any permanent damage and his penis should function normally after a few weeks’ rest.