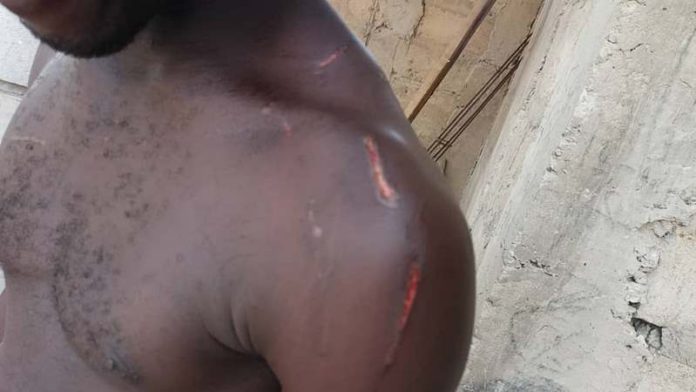 A 30-year-old man, Michael Amanor, has escaped being set ablaze for allegedly stealing a 32-inch TV set at  Kasoa Amusukope in the Awutu Senya East Municipality of the Central Region.

A group of irate residents, numbering about 15, reportedly stripped him naked, whipped him with cables, soaked him in petrol  before attempting to set him on fire.

Narrating his ordeal to Adom News’ Kofi Adjei, Mr Amanor said the timely intervention of the police saved him from death.

The victim, who has currently been discharged from the hospital, said the group invaded his home with weapons and accosted him over his alleged connection with the crime that occurred in the area.

He was, however, not home at the time of invasion as he went to file complaints with the Kasoa Police who assured he is safe.

“I returned to the house later only to be ambushed by the mob. I was clubbed, whipped and stripped naked while all my plea for mercy fell on deaf ears.

“I have no knowledge about what I’m being accused of and cannot understand why I was humiliated and brutalised based on speculations though I have no record of thievery,” he cried.

He revealed he is contemplating suicide as the only option to save his damaged reputation.

Meanwhile, Joyce Amanor, a sister of the victim, said her brother has no criminal record, hence the incident comes as a surprise to the family.

The family want the police to thoroughly investigate the matter and bring the perpetrators to book.