A cheating man was served the humiliation of his life when he was allegedly caught pants down with another man’s wife.

The man, whose identity is not yet known, is speculated to have been caught by the husband of the woman he was ‘bonking’.

As expected, he was not made to exit peacefully; he was given a hard yet entertaining task to perform before the cameras.

In the video which has been widely circulated, not only was he made to deliver a wild twerk, he was ordered to do so while laughing.

At first he was hesitant, but after the tone of the unseen man changed, he was forced to shake his backside.

Singing his own rhythm of Rihanna’s explicit Work song, the elderly man, believed to be in his fifties, had no choice but to comply.

Watching Your Story: Adom TV is the number one TV station in Ghana – Jamboai residents (25-10-21)

Husband sends wife to parents nak3d after catching her cheating

Let’s face it: Is cheating always the fault of the cheater? 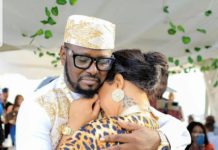