The Koforidua Circuit Court “A” has sentenced a 52-year-old Private Security guard, Daniel Addy, to eight(8) years imprisonment in hard labour for inflicting severe cutlass wounds on the head and hand of his 25-year-old cousin over missing fish in a soup.

The convict was found guilty of a charge of causing harm contrary to section 69 of the Criminal offences Act-1960(Act 29).

The facts of the case presented by prosecutor Chief Inspector Hayford Osei are that complainant – Kumi Richard is a 25-year-old electric welder whereas the convict Daniel Addy is his uncle.

The victim came to stay with the accused who is his Uncle three weeks ago at Effiduase.

On September 13, 2022, at about 9:00 pm, confusion ensued between the two after they returned from a relative house at Abrewa Nkwanta.

Daniel Addy accused the complainant of allegedly stealing a fish from a soup he left behind.

Despite denying the allegation, the accused continued to pester him.

The accused became angry and stormed out of the room to pull out a cutlass to confront the complainant.

Whilst the argument became heated, he suddenly hacked the complainant in the head and left hand with the cutlass.

The accused fled the scene leaving the victim in a pool of blood.

The victim was rescued and rushed to the Eastern Regional Hospital and subsequently, a formal complaint was lodged at Effiduase Police station.

On September 14, 2022, Police intelligence led to the arrest of the accused at his hideout in Koforidua Old Estate.

After further investigation, the accused was charged and put before the Koforidua Circuit Court “A” presided by Her Honour Marian Affoh.

He pleaded guilty but begged the Judge ” to temper justice with mercy. I know I have committed an offence but I will not do that again ” the accused said in tears.

The Judge said the offence of causing harm is a second-degree felony and therefore sentenced the accused to eight(8) years imprisonment with productive labour.

Also, the court directed the convict to pay medical compensation of Ghc6,000 in addition.

They said the Ghc6,000 compensation is inadequate since the medical bill incurred so far is about Ghc20,000, meanwhile the victim has been referred to St.Joseph Hospital for further medical care. 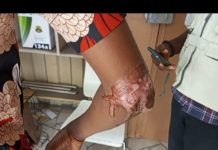