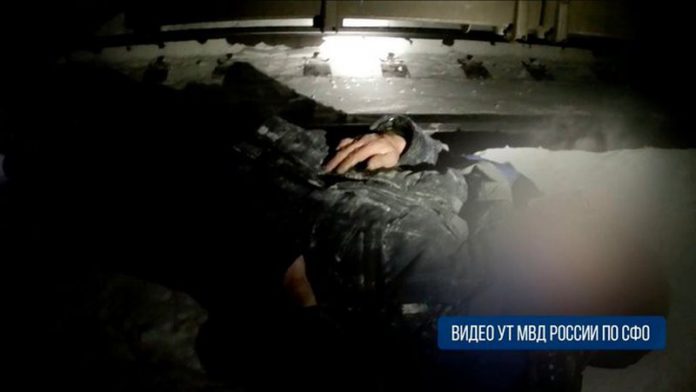 A man miraculously survived being run over by a train as he lay sleeping on a Siberian railway track in -18C cold.

There were fears the man had been killed after the driver was not able to stop the inter-city service in time.

However, train staff found the man fast asleep and unharmed under the Krasnoyarsk to Abakan service, on a branch line of the world famous Trans-Siberian railway.

A video from the Russian Interior Ministry shows how they pulled the 36-year-old Krasnoyarsk man out from under the train.

Train crew members then put him inside a carriage in an attempt to warm him up.

The crew struggled to wake the hardy Russian.

The Siberian survivor had been drinking and had fallen asleep on the track as he walked to a local station to meet a friend, he later explained.

Doctors of Kuraginskaya district hospital said the unnamed man had several bruises but no serious injuries.

Remarkably, he had avoided getting frostbite.

He remains in hospital under medical observation.

“He is very lucky,” said a local official.

It was not known how long he had been lying on the track.

The incident was between stations Krol and Dzhetka.

It’s not the first report of a tough Russian surviving freezing degrees in Siberia.

Late last year, the Mirror reported on Yegor Krivoshapkin, 45, was miraculously rescued after getting lost for more than two months in Siberia’s “ice kingdom”, Yakutia.

The dad-of-three was found alive with frostbite in the coldest populated region on earth, two weeks after rescuers gave up, thinking there was no hope of finding him alive.

He was about 190 miles from where he went missing in Yakutia, having managed to avoid being attacked by brown bears and wolves that roam the region.

Rescuers have been left scratching their heads as the reindeer herder has not been able to explain where he wandered to or how he even survived.

He was delivered to Batagay hospital after being found, where he underwent treatment for frostbite.

The dad told Svetlana by phone that he had “switched off” and “lost his sense of reality”.

He had “slept under trees” and explained he had “blackouts” and felt “in oblivion” as he wandered alone.