Benjamin Otabil, a victim of a house robbery, is devastated after discovering items he purchased for a traditional ceremony have been stolen.

Mr Otabil, who resides at Awutu Ahwiahwia, was targeted after he traveled out of town for his photography job.

The items stolen included his 45-inch flat-screen TV and GHS 700. But the victim is more concerned about his parcels for his upcoming engagement in two weeks.

Explaining to Adom News why he is gravely affected, he disclosed that the incident was the third time such a robbery had occurred.

“The marriage ceremony was to come on in two weeks but now they have stolen all the clothes and other items meant for my engagement. Now I have to postpone the Programme. These crimes are becoming too many in this area and police must act swiftly to stop them. They also took away some cash I had in the room and my 45-inch television,” he said.

He added that following the robbery, he has been forced to postpone the wedding, as he saves up to purchase a new set of items.

Residents, who gathered at his home to commiserate with him, have pleaded with the police to beef up security.

Meanwhile, the suspect connected to the first robbery was fished out and tied to a tree after he ‘stormed’ another scene to steal air-conditioner and church instrument. 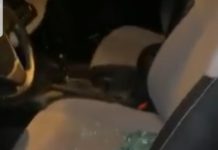