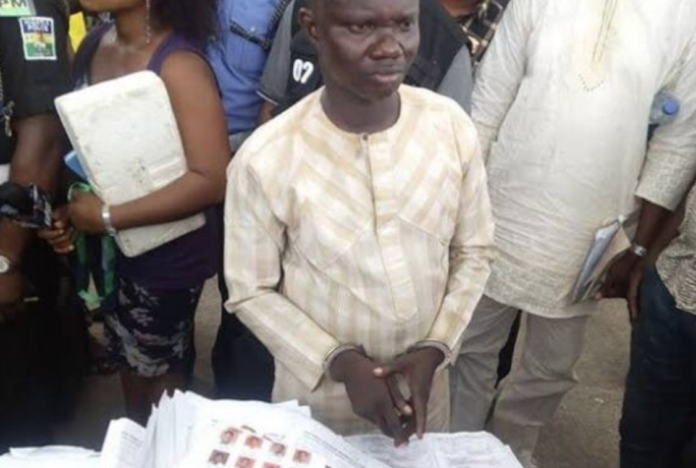 A man identified as Adekunle Aremu has been apprehended for impersonating his wife during an Osun Teacher’s recruitment exercise in Nigeria.

The impostor was caught while trying to write the recruitment examination for his wife, Oyinade Sade Adegbite at the CBT centre of Ilesha College of Education.

The Information Officer at the Ministry of Education, Roseline Olwawuni, who disclosed this in a statement on Wednesday February 10, said the suspect was apprehended with the help of operatives of the Nigerian Security and Civic Defence Corps (NSCDC)

“He was caught after his passport photograph was said not to have a matched with the photo records of applicants stored on the database of the Ministry of Education,” she stated.

Reacting to the incident, the State Commissioner for Education, Hon. Folorunsho Oladoyin condemned the act of impersonation, stressing that it is shameful that a prospective teacher could be found committing such crimes.

“It is shameful that somebody who wants to teach students academically and morally could be involved in fraudulent malpractice, what example is such a person going to set for the students, the commissioner queried. This is rather unfortunate,” said Oladoyin.

“I am using this opportunity to warn our young people to desist from cutting corners, they should know that integrity pays and it’s the only way to success. The suspect has however been handed over to the law enforcement agents for further investigation and prosecution,” he added.