Residents of Numereso in the Amansie central district of the Ashanti Region are mourning the death of a man who was a victim of a house fire.

The 48-year-old Yaw Sakyi was burnt to death after fire engulfed a four-bedroom house in which he was staying.

Witnesses told Adom News’ Isaac Normanyo that in a bizarre turnout of events, the room in which the victim was staying was not affected by the fire initially, rather, two adjoining houses were in flames.

The affected rooms burnt to ashes as they were erected with bamboo sticks.

It took rescuers a great amount of effort to break down his door before they evacuated him. It is said that he initially declined help.

It is said that he was still alive while the rescue team was making attempts, but he died shortly before he could be reached.

He is said to have become an introvert after residents mocked him over his hernia ailment. They believe that might be the same reason for declining help.

As at the time of filing the report, the police were yet to arrive at the scene. 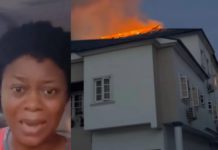