According to Mr Mahama, his government was always aware of all Anas’ works and either supported or called for action after the expose’.

“We had investigations like the ones at the port, the judges and others which late Prof Mills was involved and played a role,” he said.

Speaking in an interview on Accra-based Class FM, monitored by Adomonline.com, the National Democratic Congress (NDC) flagbearer pointed out that he was not aware of any parliamentary probe.

“We have to ask Anas of his investigations. I’m not aware of the investigations he did on parliament neither did I suppress any work,” he noted.

This comes on the back of claims that Mr Mahama in 2015 suppressed a documentary that exposed ills in Ghana’s parliament.

“Unfortunately, Prof Mills died before his commission could be fulfilled and his successor, John Dramani Mahama, has chosen to use the results selectively and to suppress other results, particularly the parliamentary one whose video is ready,” part of an article sighted on Graphic online noted. 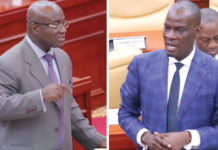 Parliament is ‘angry’; will it make or break the law?