Former President John Dramani Mahama and some National Democratic Congress (NDC) party faithful have joined the family of the late Lionel Kukondap Molbila to mourn him.

Born in 1935 at Shia Tongo in the Upper East Region of Ghana, Mr Molbila died on August 2, 2021, at the Korle Bu Teaching Hospital.

A special Memorial Mass was held on Monday, August 9, 2021, by the Dansoman Star of The Sea Catholic Church in Accra to celebrate the one-week passing of the former statesman.

The gathering was also graced by players in the Insurance industry and loved ones who travelled far and near to pay their respects to the former Managing Director of State Insurance Company (SIC) Insurance.

Delivering his sermon, the Parish Priest, Rev Fr Albert Gyenapin, reiterated the need for the world to live in love.

“Now everything is about me and not we; many young people, especially Christians have abandoned their relations or parents and leave them to suffer during their old age, a situation which does not portray the character of a good Christian,” he urged.

He called on all young people to pay particular attention to their relations who in one way or the other are suffering in life.

The late Molbila was a recipient of the highly prestigious ‘Officer of the Order of the Volta’ award.

He served under former President Dr Kwame Nkrumah in the First Republic as a District Commissioner in the now Upper East Region (Nandom) and again served in the administration of the late Jerry John Rawlings.

The late NDC stalwart held many respectable positions in the Insurance industry and in government.

After the coup, he was appointed into the then State Insurance Corporation in 1967 now SIC and by dent of his hard work rose to become Managing Director of the company.

He also served as Board Chairman of Consolidated Diamonds, Akwatia, Ghana Supplies Commission, Ghana Reinsurance, National Insurance Commission, member of The Social Security and Insurance Trust and Chairman of the Trust Hospital.

Upon retirement, he was called to head Phoenix Insurance where he was for two years.

He was survived by a wife, Mrs Florence Azumah Molbila, and four children, two males and two females.

The final funeral rites, according to the family, would be held at a yet-to-be-announced date in November this year. 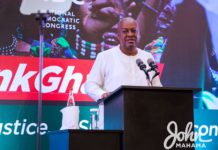