The presidential candidate of the opposition National Democratic Congress (NDC) has taken a jibe at President Nana Akufo-Addo for his numerous unfulfilled 2016 campaign promises.

Addressing some party supporters at Navarongo in the Upper East Region on Tuesday, Mr Mahama said the President, who was then in opposition, promised Ghanaians everything but has delivered nothing since he was voted into office.

“Before the election, he said all kinds of sweet talk. But what he didn’t realise was that it is not slangs that they use to govern a country; it is hard work, honesty and truth,” he said.

Mimicking President Akufo-Addo, the NDC leader cited the governing New Patriotic Party’s (NPP) pledge not to borrow: “But look at what is happening now.”

Meanwhile, President Akufo-Addo has taken on Mr Mahama for doubting the capability of his governance.

Driving through Mallam market on Wednesday, the President stressed that the Mahama government is the administration Ghanaians should run from.

According to him, he is the man who delivers what he promises and therefore, called on traders to assess his works in the first term and vote for him.

With barely 12 days to the 2020 polls, all political parties, particularly, NDC and NPP are undertaking major rallies across the country to garner enough votes to rule the country for the next four years.

When Mahama’s children joined him at NDC presser [Photo] 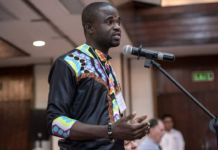