A latest video of veteran actress Grace Nortey has proven indeed that old age is the second childhood.

Madam Nortey’s 85th birthday photos and videos gave her fans a glimpse of her current situation after nothing was seen or heard of her in the last few years.

She was captured fully adorned with the beauty of wrinkles, in the company of some relations who had gathered to celebrate her.

Like most octogenarians, Madam Nortey could be seen frail and was being assisted by some persons onto the dance floor.

She was laughing heartedly as the guests cheered her on while she moved her body to one of Florence Obinim’s gospel songs.

The name Grace Nortey is one that has been echoed for decades when she penetrated the movie scene.

Having starred in multiple theatre and drama series, she is considered as one of the pioneers of classic acting in Ghana. 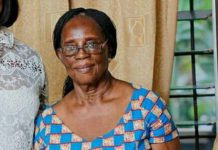 Too many empty past promises — Grace Nortey