A young lady is languishing in police cells for allegedly stabbing her lover over suspicion of infidelity.

Identified simply as Chidinma, the suspect is a Mass Communication student of Delta State Polytechnic, Ogwashi-Uku.

It was gathered that the incident happened at the residence of the victim identified as Daniel Johnson, on Wednesday, October 27.

According to him, he woke up with a feeling of a sharp object penetrating his skin while he was asleep.

When he became wide awake, he realised Chidinma had gone through his Whatsapp messages and chanced on a chat with another lady.

He said his infuriated lover did not wait for explanations before stabbing him again in his right hand.

“Then she proceeded to use a knife to stab my right hand. I woke up and called for help before it could get worse. My neighbours came and rescued me. I’m lucky to be alive,” he said.

The police were invited and she was whisked away to B division in Asaba. 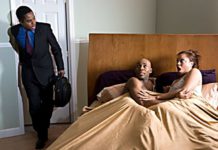