Seasoned journalist, Kwesi Pratt, says the 15 pesewas reduction in fuel price by Ghana Oil Company (GOIL) is not the solution to the fuel menace in the country.

According to him, the reduction in fuel price by GOIL is not new and that method has been in use since the past 10-15 years.

According to Mr Pratt, he doesn’t see the reduction as a reaction by government to the demands of Transport Unions.

In an interview Wednesday morning, he asserted that the reduction is not a solution to the menace as not all drivers purchase fuel at GOIL station in the country.

“Who says all drivers have access to GOIL Filling stations? So it is not a solution. GOIL is not everywhere although it is the largest distributor of petroleum product in the country and who says every driver buys from GOIL? It is not true,’’ he stressed.

According to him, government has simply calmed the nerves of the aggrieved drivers but has not dealt with the menace of fuel price in the country.

“The people I pity most in this whole exercise are the leaders of the Driver Unions since they negotiated with the government. They went into this negotiation and issued a directive that the strike should be called off,” he said. 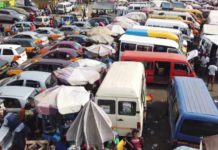 Drivers in Kumasi unhappy with 15p reduction in fuel prices