The Editor-in-Chief of the New Crusading Guide has raised red flags on the government’s move to procure some Sputnik vaccines in order to attain herd immunity.

Speaking on Newsfile, Saturday, Kweku Baako Jnr noted that the Sputnik vaccine deals undertaken by the Health Ministry with middlemen are shrouded in secrecy, hence making it difficult for Ghanaians to comprehend government’s actions.

“So there is lack of clarity and it means there isn’t much transparency and for that matter, it will be difficult to put things to the test of accountability.

“I am not convinced that as of now the approach we have taken is the right one. There is too much confusion, there is lack of clarity, there is controversy so it calls for us to reexamine what we are doing carefully,” he told Samson Lardy Anyenini.

The Health Ministry earlier this week defended the deal it had with businessman Sheikh Ahmed Dalmook Al Maktoum to purchase a dose of Sputnik vaccine at $19 which was earlier being purchased for $26.

According to the government, it sought a businessman rather than seeking to obtain the vaccines on a government-to-government basis because although it is cheaper, it is difficult to push through.

But the Ministry after backlash and condemnation from the Minority amended its decision and has decided to purchase Russia’s Sputnik V vaccines from supplier, S. L. Global Limited at $18.5 per dose.

Touching on the development, the media practitioner said the information presented to the public gives the impression that government is engaging with more than one source to procure vaccines.

“When I listen carefully, it appears there are others. All those contracts and agreements must be made public for us to know exactly what we are interrogating and not to mix them up,” he advised.

He further revealed that the agreement between government and Sheikh Ahmed Dalmook Al Maktoum is null and void until it receives approval from Parliament.

Despite agreeing to the assertion that “dead citizens cannot help to grow the society,” he chastised the government for ignoring the procurement procedures and regulations just to prevent future deaths.

“It is true we are in an emergency situation of a sort, we want to save our people, we don’t want our people to die, we are seeking herd immunity, but that is no excuse to actually ignore procurement procedures and regulations or even the Public Financial Management Act. It is no excuse, the fact that we are in a hurry to rescue people.

“The procurement regulation has room for urgent procurement and things. I am not convinced at all at this stage that we have been provided convincing information to actually endorse what is before us. There is a need for more information to be provided,” he added.

Revealed: Govt to purchase Sputnik V vaccine at $26 per dose 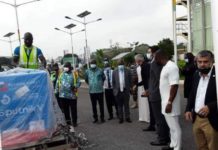 Health Ministry to respond to allegations of over-priced Sputnik vaccine