The Komenda Sugar Factory is set to bounce back in April this year.

President Akufo-Addo gave the assurance when the chiefs and elders of Komenda in the Central Region paid a courtesy call on him at the Jubilee House yesterday.

He said works on the project are expected to be completed by the end of March to pave way for processing work to start in April.

“Some civil works are still ongoing on the factory and hopefully by the grace of God, they should be completed by the end of March,” he noted, adding “the Indians who are our partners as far as the project is concerned, have assured us that by April, production will begin.”

President Akufo-Addo said “the completion of the factory is in progress and it is my fervent hope that this time round, it will become operational.”

Concerning the source of raw materials to feed the factory, the President disclosed that he was reliably informed that the board of the factory had secured a 20,000 acre-land for growing sugarcane.

The President indicated that the services of a technical partner with expertise in the sugar industry had been engaged to manage the technical operations of the factory.

President Akufo-Addo said he expected the Komenda Sugar Factory to commence commercial production in the first quarter of 2022.

Nana Kwahin V, Twafohene and acting President of the Komenda Traditional Council commended the government for putting aside all the politics that have surrounded the Komenda Sugar Factory and taking concrete steps to ensure the project becomes operational.

Touching on the sea defence project at Komenda, Nana Kwahin V expressed appreciation on behalf of the people to the government.

He requested that government should initiate all the processes to make Komenda a full-blown district on its own. 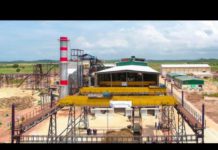 Excerpts from 1D1F Documentary: We have no raw materials for Komenda Sugar Factory – Minister