Speaking on Joy FM Super Morning Show Tuesday, May 18, the former Deputy General Secretary of the National Democratic Congress (NDC) condemned the alleged attempt by a member of the Vigilante group to see Mr Addo’s manhood when he visited the washroom.

“How did those boys have access to be able to hit the DCOP with the butt of an AK 47 rifle, follow him to the washroom and tell him that there is nothing wrong with seeing his manhood? That is a complete invasion of privacy. Apart from assaulting Mr Opare they invaded his privacy,” he said.

Mr Anyidoho also narrated how he suffered emotional trauma while in the custody of the National Security.

According to him, he was not subjected to any form of physical abuse or torture, however, the nature of the room in which he was detained was enough to cause anyone to lose their sanity.

“In my case, I was not beaten, I was not tortured or manhandled but another part of the trauma is being in solitary confinement.

“At a point, I had to sit and watch the ants going up and down the wall and even try to give them names and try to even have a conversation with them to be able to engage the brain and keep my sanity intact,” he said. 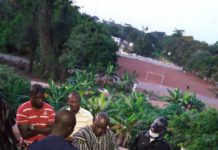